The largest mosque in the world is distinguished not only by its large size, but also by its unique interior decoration. As you know, Muslims take places of worship very seriously, so they spare no effort and money for this. In many Asian countries, it is customary to open one large mosque each year in the country. We have prepared for you the 5 largest mosques on the planet.

TOP 5 largest mosques in the world

In fifth place in our ranking is the Indian mosque Jama Masjid, built in the capital of the country. The territory adjacent to it can accommodate up to 200,000 believers. It is worth noting that no more than 25,000 people fit in the mosque itself.

The temple was built in the 17th century from marble and sandstone. You can enter the building through the southern, northern and or eastern gates. In addition to the religious component, the mosque is of great value in terms of architecture and history.

The next shrine on the list is the architectural ensemble of the Faisal Mosque in Islamabad, built by the efforts of the sheikhs of Saudi Arabia. It is curious that the building has an unconventional architecture for Muslims – the shape of a Bedouin tent. 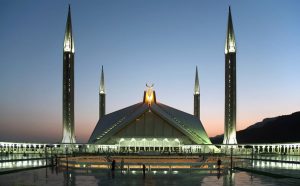 At the beginning of construction, the appearance of the mosque caused indignation among many citizens, but when the building was erected, all discontent disappeared. The halls of one of the largest mosques in the world can accommodate up to 300,000 people.

Amazingly, the Iranian Imam Reza Temple-Mausoleum can accommodate about 700,000 believers! This building is not only a large shrine, but also an impressive library. Inside the complex are several temples and tombs of famous imams.

The largest mosque of the tomb, built in the 15th century, is called Govarshad. It has the form of a kind of ring, covering the tomb of Imam Reza. The remaining buildings form the 2nd turn of the ring, and modern temples form the third. Such an architectural solution can accommodate up to 200,000 believers.

The second largest mosque in the world is the mosque of the prophet Masjid Al-Nabawi, which can accommodate approximately 1 million people. According to legend, the construction of the temple began in 622 during the lifetime of the Prophet Muhammad, who was later buried here. 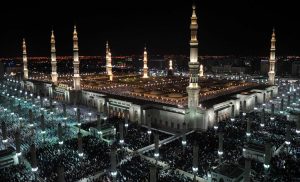 The mosque, which is surrounded by 11 minarets 105 m high, is a place of reverence for Muhammad. About 400,000 parishioners pray here every day, and another 200,000 believers are in the nearby square. It is worth noting that during the holidays, the number of people exceeds 1 million.

The first place among the largest mosques on the planet is occupied by the Masjid Al-Haram Mosque in Saudi Arabia. It was built in Mecca and it is within its walls that the key Muslim shrine, the Kaaba, is kept. Muslims believe that the creators of the shrine are the angels themselves.

Since 638, the building has repeatedly changed the layout, the external facade and gradually expanded until the mosque’s capacity reached 1 million people, and the total – 2 million. Even today, this religious complex continues to expand, and the area of ​​357,000 m² will be increased in the near future even more.

At the Masjid Al-Haram, sermons are delivered in Urdu, Arabic and English. Air conditioning is installed in the central part of the building, as well as an escalator leading to the women’s and men’s areas. Foreigners who wish to participate in the service are provided with headphones in which they can hear the translation of the sermon.